skip to main | skip to sidebar

Gloucester Grand Prix: the more things stay the same, the more they change

The Grand Prix of Gloucester is the jewel of New England Cyclocross races. Biggest race, stiffest competition, most anticipation.

Yet for the important of the race, the course is surprisingly simple. There is a long up hill start-finish pavement, sweeping grass turns, one hillside to play on, a windy straight by the harbor, and the sand pit. All good elements, but limited in number and scope.


Or so one could think. The course designer for almost every Gloucester GP has been Tom Stevens. Someone this week deemed him the Christo of cyclocross courses. But I think of him more as a Mozart. He takes the same basic elements almost any park might have and combines them in new inventive ways; even on at a venue that's been raced at dozens of times. 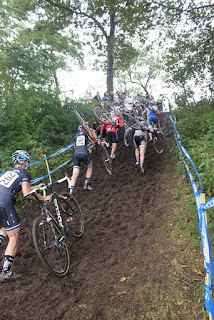 Two years ago he added the quad busting run up off the sea wall. Now its seems that it has always been part of Gloucester. We were forewarned that he had new elements in mind for this year. But I had no idea how devilish and beautiful they could be. 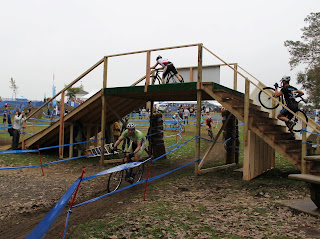 Day One brought a FLYOVER to Gloucester! Before last year no New England cyclocross courses had a flyover. Most of our courses are large enough and steep enough not to need one, but they are just so Euro cool. Fortunately Gary David comissioned Ron Gougen to build one for MRC CX last season. Then Ice Weasels and the NE Regionals courses put it up too. But I never imagined that Tom would set it up for a thousand racers to careen over it at Gloucester. 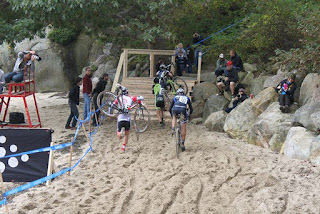 Day Two was even more special. For years Paul Boudreau has dreamed of adding a special bit of terrain to the course, Half Moon Beach. For all the years I've race at Fort Stage Park, I did not know this beach even existed. On this past Sunday the course ran down a paved boat ramp to a natural deep sand beach with a stair case at the other end. The stairs lead up the famous Gloucester rock. It was picture perfect, and challenging. Even the tide had to be held at bay to allow the elites to race this section late in the afternoon The trick to Half Moon Beach was to ride as far onto the sand as speed would allow, then gracefully dismount to the base of the stairs. This was much easier to write than to do. Even several of the elites sprawled out on the beach. I hope that we get to visit this section again.
Whether we do or not, I'm certain that the course will offer up new challenges, just like it always does.
Posted by ringcycles at 8:23 PM

ringcycles
I wander, I wonder, I write.